If you’ve read any of my Contact Center Pipeline columns over the past nine years, you’ve probably noticed that I usually sneak in something about music in just about every one of them. That’s because I like music. Barely a day goes by that I’m not doing something with music in one way or another; studying music, playing music, watching musicians perform online, or just listening to music.

I’m not musically gifted in any way and when it comes to playing an instrument, I’m just a hack. But I enjoy every aspect of music and over the years, I’ve managed to pack my brain with more useless musical information and trivia to the point that it now borders on obsessive. I’m equally enthusiastic about bluegrass music, classic rock, blues, folk, Americana, western, old country, and I could listen to a good jazz guitarist like John Pizzarelli play all night.

But being a music nerd is a lonely existence. Most people couldn’t care less about the musical minutiae that I find so fascinating. I even stump my guitar teacher when it comes to classic rock trivia. So, I was more than pleasantly surprised when I found a kindred spirit in Zack Taylor.

Zack is the Director of Strategic Communications for the Contact Center Business Unit at Cisco. I invited him to be interviewed for my January 2020 column entitled, Contact Center 2020: Yesterday and Today, which was intended to be a review of the contact center industry as we stood on the cusp of a new decade. I stole the title from the 1966 Beatles’ album Yesterday and Today. I should have known that using a Beatles reference would be dangerous for both Zack and me. We ended up talking as much about music as we did the contact center industry, and we shared some of that conversation in the column.

One thing led to another and I proposed to Zack that we co-author a blog series in which we could talk about the contact center industry and maybe throw in a little music talk while we’re at it. We tossed around a few ideas for a blog title and Zack came up with “The Long and Winding Road.”

“Yes, Paul and I have a shared love for music,” Zack explained. “I still remember getting in the car with my mom and brother driving to our local department store to buy the Meet the Beatles! record… back when there was vinyl… well hold on, vinyl is back! It turns out the song ‘The Long and Winding Road’ was one of the last songs recorded by the Beatles and was inspired by Paul McCartney’s visit to his farm in Scotland. The title is very descriptive, in that the Beatles had been through a tumultuous eight-year period which started with the ‘Love Me Do’ era. And while it was the end of one era, it was the beginning of another—the highly successful solo careers of the individual Beatles.

“The contact center market is also at a similar position with the end of one era and the beginning of another occurring, driven by the combination of cloud, AI and new business models,” Zack continued. “The interesting thing that we’d like to explore is how this dynamic has happened more than once in our industry, and inspecting what drove the change and what emerged from the change is a worth inspecting.”

Our plans for launching this blog series were sidelined by the COVID-19 pandemic and the fact that neither of us thought it would be appropriate to publish a lighter look at the contact center industry at such a serious time. Today, however, much of the world is slowly trying to return to something akin to normalcy so we thought now would be a good time to take a chance with introducing our series. It’s time to bring a little fun to what has been a very daunting time.

Read the next post in this series: Roll with the Changes.

Adjusting Strategies in the New Normal 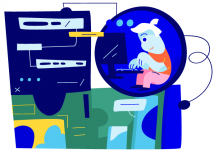