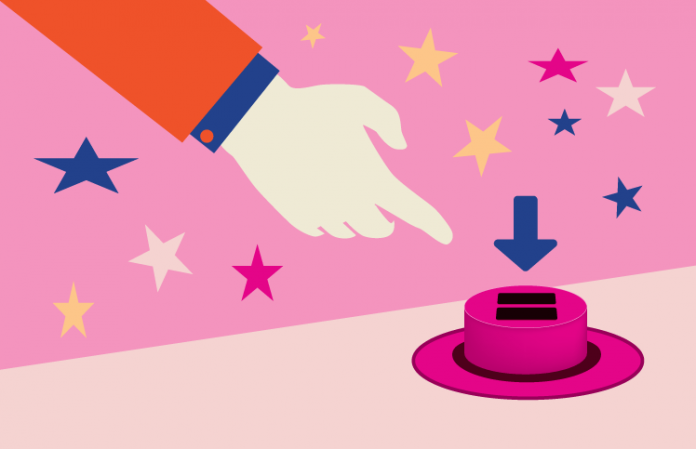 I don’t know about you, but I love my pause button so much that I pay my cable company insane amounts of money monthly for the privilege of its use. I tried living without it and just couldn’t. I can pause live TV to make a call, take a call, answer the door, turn down the stove, etc. All manner of wonderful options exist!

The pause button was invented in the 1960s. Reel-to-reel tape recorders are thought to be the first commercial application accompanied by the associated iconic symbol. Soon anyone listening to music had the ability to pause on their own cassette tape deck, Walkman, etc. Of course, this was audio only. Once VCRs (video cassette recorders) and DVRs (digital video recorder) became common, pause buttons were used in all manner of electronics and continue to be used today.

The actual originator of the pause button is not known. However, according to Stuart Sweet’s Solid Signal Blog, its origins can be traced to the caesura. A caesura is “a symbol for PAUSE that goes back several hundred years. In musical notation, a caesura is the term used for a pause of decent size. The same word is used for the part of a poem when you take a breath.” A caesura is indicated in poetry by the symbol || and in music by the symbol //.

Anyone who has studied public speaking will also recognize a caesura as a time to pause in the written/practice version of a speech or presentation.

Now you have a little history of the pause button. Everyone is familiar with its function and few ever have an issue with it… until now! When applied to a project, initiative or change effort, the pause button pauses progress! We must be able to recognize when the pause button is being pushed in order to move initiatives forward.

Think about where the contact center typically fits within an enterprise. It usually sits at the center of what amounts to many masters. E-commerce centers interact with customers, the executive level, merchandising, marketing, the warehouse, IT, etc. Healthcare centers interact with patients, patient families and care providers, the executive level, providers and their practices, operational leadership, medical leadership, IT, etc. All this is to say that many contact centers do, in fact, have many masters, each with varied interests and priorities. When changes happen in an enterprise there are likely to be cross-functional dependencies that require both collaboration and cooperation. However, sometimes those varied business units bring their unique interests and priorities to the project… tidily wrapped up in project pause buttons.

A consolidation effort is an example of a project in which contact centers play a significant role. When the decision is made to co-locate all consumer channels under a single chain of command and location, existing locations often begin an almost subconscious bidding war. Who will win the location? To whom will the center report? And let’s face it; the two most common business units involved are the marketing center and the operations center. Depending on how the project is managed, these two units will either become collaborators or competitors and conspirators that derail the project. To be successful, most projects need the collaboration option to prevail.

In Lisa Kwan’s article, “The Collaboration Blind Spot” published in the Harvard Business Review, the author beautifully identifies collaboration as central to future success. Kwan says, “Leaders understand the central role that cross-group collaboration plays in business today. It’s how companies of all shapes and sizes… plan to innovate, stay relevant and solve problems that seem unsolvable. It’s how they plan to meet changing customer expectations, maintain market share and stay ahead (or just abreast) of competitors. In short, it’s how companies plan to succeed, compete and just survive.”

Keep in mind that collaboration accompanies change, and change is not easy; in fact, change efforts often fail. Research by McKinsey and Company “shows that 70% of all transformations fail.” When involved in a collaboration effort, leadership and the project team must keep an eye out for threats.

What do project threats look like? Kwan has put together a great list of threat warnings based on her research. These are quoted below.

“During cross-group collaborations, look for frequent occurrences of territorial behaviors, which suggest that groups are feeling threatened by what you’ve asked them to do. These might include:

Impact of the Project Pause

When you hear statements such as, “We need more time to study it,” “We need more data,” or any other assertions found in the “analysis of paralysis” script, they are likely a pause button. Anything that contributes to delays or reflects indecisiveness equals a pause… a stop or delay to the project. The pause is often followed by the assignment of blame: “They are uncooperative,” “They can’t be trusted,” “They ALWAYS hide information,” and “They NEVER give us what we need.” I am sure you have your own inventory of pause button phrases. This is not to say that questions are unimportant; it is when questions are posed well past their “due date” that they can become more of a “pause.”

Leaders who launch transformational change with a dependence on collaboration cannot assume compliance is a given. Care and attention must be paid to what is being asked of these business units. You must address up front the impact of the change and empower them to fully participate in designing the change. If this is not done, the closer you get to the project finish line the more pauses you will be forced to endure. The project will get delayed and then forgotten until the next time it is attempted. Then the new project pause button strategy will include the infamous statement, “We already tried that and it didn’t work!”

As you navigate the wild waters of change, understand that collaboration is an outcome and not a directive. You can’t really mandate collaboration. Leaders must keep an eye out for “threats” and address them head on so that the team feels secure and proud of its accomplishments. As a result, the likelihood of project pause buttons will be significantly diminished and transformational changes more likely to succeed.

Collaboration: Distinguishing the Buzz from the Buzzword